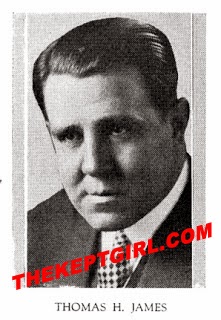 When J. Kingston Pierce was writing about The Kept Girl for Kirkus, he conducted a lengthy email interview with author Kim Cooper about the source material and inspirations behind the book.

Once the Kirkus feature was posted, the interview appeared on The Rap Sheet blog.

The section below focuses on Kim's discovery of Thomas H. James as a likely model for the Philip Marlowe character.

With the exception of Thomas H. James' photograph, these images from his pamphlet Chief Steckel Unmasked (1931) have never before been seen online. 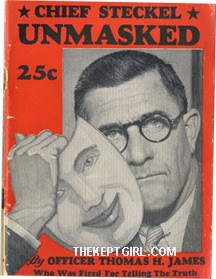 JKP: You allude in the Acknowledgements section of your novel to a “scarce self-published pamphlet,” 1931’s Chief Steckel Unmasked, by investigator Thomas H. James, which you suggest “showed him to be a very likely model for Chandler’s white knight detective, Philip Marlowe …” How did James’ pamphlet convince you of that investigator’s influence on Chandler? Did the two men know one other?
KC: When my old ’zine world pal Lynn Peril--that’s her on the cover of RE/Search’s Zines! Vol.1--gifted me with Chief Steckel Unmasked, I immediately turned to ProQuest to see what the L.A. Times had to say about the interesting fellow who had written and self-published it.
It turns out Thomas H. James … was famous for preaching civic reform from his LAPD beat at Seventh and Broadway--the same intersection where, a few years later, the “Cafeteria Kid,” Clifford Clinton, would effect the recall of corrupt L.A. Mayor Frank Shaw.
[James] was perhaps more famous for his flamboyant attention to service while helping people cross the street, being featured in a Los Angeles Times column by Ben S. Lemmon about the lively intersection that ran in April 1929. James would be reassigned to the deep San Fernando Valley, then fired in 1931 for bad-mouthing the mayor and police chief to a couple of undercover investigators. His pamphlet followed this sting operation. 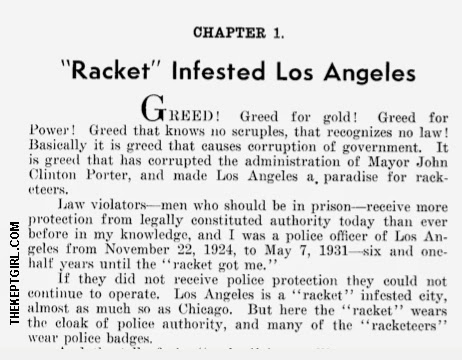 Chandler’s office was two blocks to the west of Seventh and Broadway. Did they know each other? Know of each other? Circumstantial evidence suggests they easily could have. At the time, of course, James was much more famous than Chandler.
Thomas James was the first person who suggested the possibility of a “real-life Philip Marlowe.” My husband, Richard, has since built a list of such characters, including [homicide detective] Aldo Corsini and George Contreras [once an investigator with the L.A. district attorney’s office]. They’re tarnished and conflicted men, but fascinating ones, and in researching their careers we’ve learned a lot about the very odd ways in which the police, vice, and politics intersected in Prohibition-era Los Angeles.
The longer we looked into Chandler, the more winking tributes to real people we found in his writing. I’m particularly proud of sleuthing out the source of the name “Treloar Building” from The Lady in the Lake [1943], a nod to the athletic director at the Los Angeles Athletic Club. He sets murders in real buildings and builds entire plots around real crimes. Why shouldn’t Philip Marlowe be a real person, or a composite of several?
Finally, there’s the little matter of Chandler’s [1935] short story “Spanish Blood,” which is based on David Clark’s notorious shooting of gambling boss Charlie Crawford and Herbert Spencer in May 1931. Spencer published a muckraking political magazine with which Thomas James may have had an affiliation. Clark worked for the D.A.’s office, and had prosecuted Albert Marco in the [1928] Ship Café shooting. The backlash from the Marco case was what led to Thomas James’ removal from the [L.A.] Police Commission investigator’s roll and his demotion to beat cop. At Clark’s trial, James testified that Clark had asked him to intercede with Spencer on behalf of gambling boss Guy McAfee, who supported Clark’s political ambitions. James later sent a letter to the Los Angeles Times, thanking them for not smearing Spencer posthumously, as other papers had.
The connections are there, and they run deep. 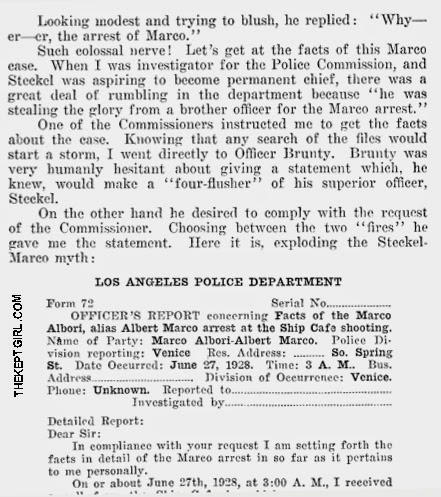 JKP: What did James go on to do later in his life, post-1920s?
KC: After fighting for and winning the right to return to police work, James retired early and got back into journalism, publishing a trade magazine for police officers. He married a society woman who shared his prohibitionist interests, and was living in a very nice house in Glendale at the time of his premature death in 1949.
JKP: Wait, what do you mean James “got back into journalism”? Did he work as a journalist before signing on with the L.A. force?
KC: I consider his self-published pamphlet to be journalism, but there is also a strong probability that Tom James clandestinely provided information to the muckraking journal The Critic of Critics before he was drummed out of the force. 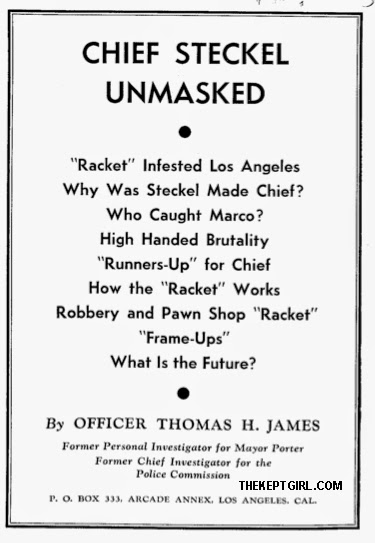