The Case of the Spectral Headache 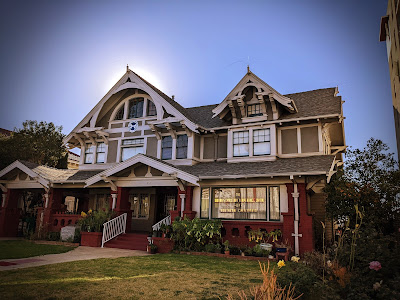 On the occasion of the announcement that the archives of the Woman’s Christian Temperance Union of Southern California are no longer stored in an old Craftsman mansion in Koreatown, but are now in the care of the Willard House Museum & WCTU Archives in Evanston, Illinois, I'm republishing this post that was part of the 2014 book release blog tour, hosted by Drey's Library.

While I'm pleased that this material will be properly organized, protected from the elements and accessible to scholars, it's always sad when a local archive leaves Southern California.

Something my husband Richard Schave and enjoy as a side effect of our work researching Los Angeles lore is to help steer historic documents into institutional archives, including a previously unknown rendering of the National Register Bradbury Building. Maybe we would asked the nice WCTU folks about their plans, had our one visit to view the material in 2012 not resulted in a rather nasty supernatural experience. We held off returning for four years, only to be told they were packing up most of the collection for the move east.

Read on for The Case of the Spectral Headache...

The Kept Girl is based on a real Los Angeles cult murder investigation of the late 1920s, and most of the characters in the novel are based on actual people. In order to portray them accurately, a lot of research had to be done before I could start writing.

One of my three detectives is LAPD officer Tom James, who was the foster son of Allie Wheeler, a prominent member of the local branch of the Women's Christian Temperance Union (WCTU), a lobby group that sought to ban alcohol consumption in America.  Tom lived in his foster mother's home, and they were politically active together.

I knew a bit about the WCTU's work on a national level, but not much about the local organization. So I was delighted to discover that the WCTU still maintains a presence in Los Angeles, with offices in a charming old Craftsman house in the very neighborhood where much of my novel is set. Better still, one of their members maintains an archive, and would be happy to let interested researchers come in and consult it.

An appointment was made for a small group of Los Angeles history fiends to visit the WCTU headquarters, where we spent a fascinating afternoon in good company, learning about the organization's history and looking through old books, photographs and memorabilia, including a marvelous creepy automaton figure that promotes sobriety at the County Fair.

Here is video of another WCTU automaton figure, similar to the one in Los Angeles.

I even found a photo of Allie Wheeler as a young woman. All in all, a most successful day in the archives!

Or so I thought, until that evening, when I decided to unwind with a small glass of wine. A few sips from the glass and it hit me—a headache like I have never felt before in my life. Located behind my left eye, it felt as if an angry child was trying to dig that eye out of my head with a grapefruit spoon.

Left eye shut against the light, sweating, I managed to do an internet search for my symptoms and determined it was almost certainly a cluster headache, an extremely rare form of migraine, and that nothing much could be done except wait it out.

I am not a migraine sufferer, but here I was, having hours before opened the Pandora's Box of the WCTU archives and thoughtlessly celebrated with a snoot full, struck down with the very worst sort of migraine, the one colloquially called a "suicide headache."

I huddled on the couch for hours, with an ice pack clutched to my neck. It was terrible. Then, after midnight, merciful sleep.

I felt physically fine in the morning, but mentally shaken. I told Richard what had happened, and he immediately blamed my experience on an elemental force freed when I had stirred up the spirits of temperance activism. He suspected that this elemental had followed me home, and didn't like me taking a drink.

Maybe he was right. All I knew was, I had a book to write, and didn't dare risk another cluster headache. I stayed sober for many months. There were no more headaches. I wrote a rather funny scene in which a large group of WCTU ladies help my detectives Tom James and Raymond Chandler with their case, while politely ignoring the fact that Chandler is clearly hungover from the night before.

I don't know what happened that night the cluster headache came upon me, if Allie Wheeler and her friends had anything to do with it or if was just an odd coincidence. But the intensity of the pain drove home to me just how intense were the belief systems of the people I was writing about—not just the temperance activists, but also the cultists who had their headquarters just six blocks away from the archive.

All of these people are decades dead, but here I was stirring up their passions, fictionalizing their appearances, reviving their relationships, putting words in their mouths. It was serious work, and had to be approached with respect. I left the liquor cabinet doors closed, and took up my pen, determined to do right by these old citizens of my city. I like to think they'd be pleased with the results, and if they're not, I hope they'll make that known in a gentler way than the last message from beyond.