Sign up for the newsletter to receive announcements of upcoming readings, blog tours and special events.

Ongoing: Kim co-hosts Esotouric's weekly crime bus and literary Los Angeles tours and will sign copies of The Kept Girl for attendees before and after tours.

May 5, 2016 - Presenting original research on The Capitol Records Carpool Killing for the California Association of Criminalists Spring seminar (not a public event, but the case is featured on Esotouric's Hollywood! tour).

The Kept Girl Blog Tour runs through February 2014, at the following fine websites: 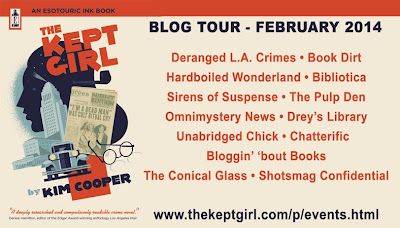